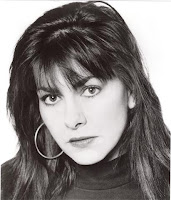 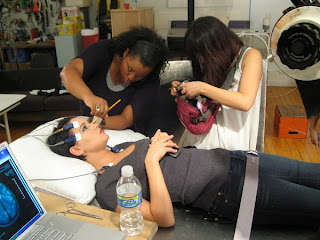 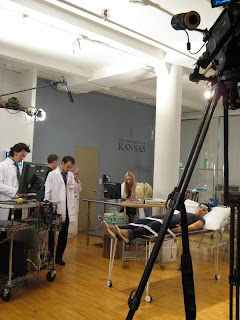 Patti Beninati is one of those rare breeds of women - a Sci-Fi Writer/Director/Producer with a vision and drive that completely awes me. She’s also a generous and warm human being, as well as a great friend.
Armed with a BA in journalism, Patti Beninati has made a career in the music world by creating a music and artist entertainment management firm called PB Entertainment Company in 2000. She would later sell it, and in 2006, Are U Trippin Films was born when she teamed up with fellow Writer/Director Michael K. Anderson.

Beninati has produced/directed many TV shows, live concerts, and events that featured today’s' biggest rock stars, and currently still manages several rock bands. She was a principal host/writer/producer/director for the first online Webcasting live event music channel on Broadcast.com, and then later on Yahoo! called Virtually Giggin It. In the past, she worked as a freelance TV Producer for Cablevision and a TV Segment Producer on the syndicated Fox TV show, The Music Scoupe, hosted by actress Kelly Ripa.
Then in 2009, a new Production Company called Centerboro Productions was also created alongside Are U Trippin Films. The new company hopes to produce at least 10 projects over the next 3 years, some of them featuring well-known Sci-Fi stars and icons. They are currently working on 2 new pilots called DMAN and Kyle Youngblood, as well as on several movies of the week, one of which is titled The Newcomers.
Just recently, Beninati attended the 2009 San Diego Comic Con (SDCC) - also called The Con. She related her experience in an exclusive article soon to be published in a New York/New Jersey newspaper. I had the chance to interview her about it, and part of this article will be reproduced exclusively here for this blog in the following blogpost.

As a Sci-Fi Writer/Director/Producer, why do you think Comic-Con is such an important spring-board for genre shows and films?
Over 140, 000 people converged on SDCC. It’s fascinating how fans and industry folks can all intermingle --- no barriers, and all in one place! That’s why I truly love the event. I can meet anyone, from a celebrity to a studio executive. As a Sci-Fi writer and director it gave me the ability to consolidate all of my meetings with actors, studios, and productions companies all in one location. I also got a change to see the hottest movies, TV shows, and comic books coming up. I can’t wait for next years Comic Con!

Was this past Comic-Con your first event of the kind ever?
No, I recently attended NYC’s Comic Con, which is a smaller version of the SDCC event.

What aspect of the Con did you personally find most fascinating?
Seeing the fans in meet and greet sessions and watching the sheer joy on their faces, as they got up close to their favorite stars to get an autograph or just simply stop by a booth to chat with them.

Can you tell us about some of the upcoming projects you and your production company, Are U Trippin Films, are currently working on?
Yes, this really an exciting time for me, and my partner Michael K. Anderson. We recently opened another production company, called Centerboro Productions, that will be the home of 2 new intriguing Sci-Fi TV series, DMAN & KYLE YOUNGBLOOD. I had the honor of writing and directing the DMAN TV series pilot, and it was a blast! The premise of DMAN is about Q7, a dangerous telepathic being from another dimension, finds himself lost and alone on modern-day Earth, but his violent nature changes after he meets Miley, a telepath, who teaches him about humanity and love, as they are pursued by a shadowy government agency. KYLE YOUNGBLOOD is about eccentric scientist Kyle Youngblood who heads up an underfunded team of misfits whose mission is to investigate paranormal and extraterrestrial activity in the rural Midwest. We just finished shooting the unique pilots, and they are both in post production, soon to be presented to the networks. Our TV pilots will feature a few actors, who are currently in a hit Sci-Fi TV series. Many people are surprised at the buzz on them now, with Twitter helping to spread the word, and turn up the hype, we’ve received many inquires from executives, who can’t wait to see them. Additionally, we are going to co-produce 2 MOW’s with another production company that will have some of the most famous TV Sci-Fi stars of today. I’m so numb that my feature film, entitled, THE NEWCOMERS which is a chilling blend of Signs meets Independence Day meets Transformers meets District 9 will soon be in the hands of a big Producer, who will help us get it all going. I get the sense that 2010 is gong to be a big year for me! People ask me… why do I like to write Sci-Fi? and I reply… Ha! I’ am SCI-FI! I want people who see my films to be left with WHAT IF…?

Why do you still like to write articles?
Well, I have a Journalism Degree and a minor in film & TV, and have written many published articles. I like to read and write entertainment editorials, and music reviews, for newspapers, to stay current using my writing skills --- it helps me when I write my scripts. I took the opportunity at THE CON to interview several actors, and writers, including creator and writer, Toby Whithouse of “Being Human”, and his actors in the series, and some people from the “Dr. Who” cast. They all were so wonderful to me, including PR maven, Amy Mulcair, and some folks of BBC America, who arranged the interviews.

My Thanks to Patti Beninati for taking time to answer these questions and for her kind permission to use her article and personal pictures.
Posted by NathalieC at 8:51 AM